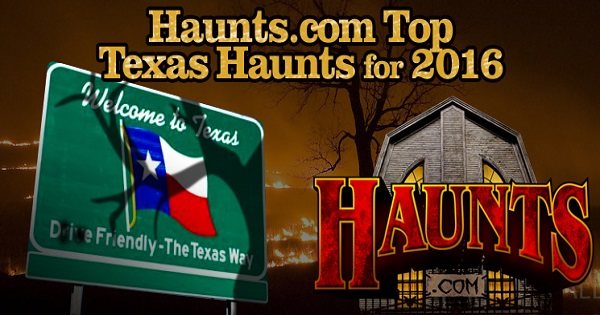 With dozen of haunts calling Texas home, it wasn't easy to pick such a short list of Haunted Attractions for the Must See Texas Haunts that gave locals heart-pounding fun during the 2016 Halloween Season. Tons of terror was delivered all season long to thrill seekers, whether they resided in Dallas, were looking for frightening fun in Houston, or thrills and chills in San Antonio, the seasonal fun was endless!

With so many  scary-good attractions throughout The Lone Star State, it's hard to visit them all in just one Halloween Season. To make things a bit easier for when locals go searching for a Haunted Attraction to check out this year, Haunts.com has put together a list of Must See Haunted Attractions throughout Texas that received outstanding customer reviews and ratings in the 2016 Halloween Season. Take a look at the list below so you don't miss out on the biggest and baddest scares of the 2017 Halloween Season!

Presented by DFW Fright Nights Inc., The Parker House Haunted Attraction in Denton is a haunt that was inspired by true ghost stories that surrounded the location. Over 65 years ago, Old Man Parker, his wife Nancy and daughter Mary opened their home to families who experienced deaths of loved ones. Until the 1940's, families would keep their deceased family members in their homes until the time came for them to be buried. The Parker House ended up being a spot for families to do just this, which means an enormous amount of dead bodies were brought to the home before they were set to rest.

The Parker's called the place "The Parker's Funeral Home" and they quickly began to see profit from the endeavor. But then came the big businesses, which made the funeral home go downhill. Mary began to salvage parts of the dead bodies to resell on the black market, removing their organs without letting family members know. After some time, Mary began to lure her victims in order to keep the morgue alive and booming, telling runaways and the homeless that she'd give them a job and a place to stay. Once they followed her into her trap, she would remove their body parts in the most horrific ways and get rid of the remains in the graveyard or cremation chamber.

The attraction features three haunts in one, including The Parker's Mortuary, The Parker Plantation and Ratliff's Sanitarium. Celebrate the Halloween Season and find out who (or what) resides within the Parker House - that is, if you dare!

While these haunts may not have snagged the #1 Spot for the 2016 Halloween Season, the race was tight, and all of our Top Haunts for 2016 are worth visiting this season if you can!

Houston Scream Fest - Houston, TX
The Houston Scream Fest is not just any Haunted House, it's a month long festival that celebrates the spookiness of the Halloween Season. With an array of entertainment, including a Zombie Maze with paintball, live concerts, freak show performances, carnival games, food vendors and even Horror films shown on a big screen. The Haunted Attraction offers eight different Haunted Houses for thrill seekers in the Houston area to take on, and then there's Camp Blood - where you can dance under the lights as a DJ spins some music for those who have braved the haunts!

Kingwood Asylum - Kingwood, TX
A Top 10 Rated Attraction Nominee on TexasHauntedHouses.com, Kingwood Asylum is said to be haunted by the unfortunate souls who were treated by Dr. Phillip Blackman and his staff. The asylum has been shut down for decades, standing abandoned, with many still lingering its halls. Some even say Dr. Blackman's work is still being performed today be the younger members of his facility. Do you dare enter and wander its grounds, unsure of who you'll come face to face with before you have the chance to escape!

Slaughter House - Garland, TX
Delivering tons of terror to thrill-seeking locals for over 16 years, Slaughter House in Garland is infested with creepy clowns that are in search of fresh bodies. For many years, Slaughter House Meats had a long running reputation for their taste and quality, but then its owners were murdered by savage killer clowns that escaped a circus train, in hopes of turning the processing plant into a sinister destination. Will you be their next meal?

The Crypt Haunted House - Farmersville, TX
Located in Farmersville, The Crypt Haunted House expanded its location in 2016, giving locals more room for terrorizing fun. What was once a farmhouse located in the rolling hills of Collin County, has been transformed into an utter nightmare. Visitors will first venture through the swamps of Crystal Lake, before traveling through back alleys, mazes and a big top circus. Then from there they'll reach their final destination, infested with clowns, zombies, and other creepy creatures of all kinds!

Creepy Hollow Haunted House - Rosharon, TX
Located just a few minutes south of Houston, Creepy Hollow Haunted House made it as a Top 10 Rated Attraction Nominee on TexasHauntedHouses.com in 2015 and features three haunted attractions at one great location. Visitors can take on The 288 Scare Factory, The Dark Woods and Pitch Black, all while enjoying other fun entertainment offered at the attraction, including vendors, food, music, Midway, and a Freakshow! And for those interested in a good challenge, Creepy Hollow also offers an Escape Room.

J & F House of Terror - Garland, TX
For the 2016 Halloween Season, Garland's J & F House of Terror joined forces with Slaughter House, delivering frightening fun all season long. As a Top 10 Rated Attraction Nominee on TexasHauntedHouses.com, J & F House of Terror created an all new Haunted Maze for locals to journey through. With creatures of all kinds lurking throughout the maze, beware as you make each and every turn, you never know who may be waiting for you around the next corner!

Amarillo Scaregrounds - Amarillo, TX
Offering five separate attractions at one location, Amarillo Scaregrounds features thousands of square feet of pure terror. Attractions include Insanitarium, where zombies have overrun a hospital, Terror, full of everything that goes bump in the night, The Basement, your worst nightmares throughout 15,000 square feet, Blackout Maze, an unhaunted maze where you must find your way out in the dark, and Zombie Apocalypse, a Laser Tag training center so you're well prepared to take on the undead that call Amarillo Scaregrounds home!

The Blackness Haunted House - Plainview, TX
The Blackness Haunted House is where deformed warehouse worker Dominique, "Dom" resides. Legend says that in the late 1950's, Dom couldn't keep up with the other workers because of his condition, and was constantly ridiculed because of it. The plant shut down in 1978 and Dom was left broke and homeless, going to the abandoned warehouse to seek shelter. Be careful as you make your way through The Blackness, as Dom is no longer who he once was, out to seek revenge after being mistreated by so many.

13th Floor Haunted House - San Antonio, TX
San Antonio's 13th Floor Haunted House is no attraction for the faint of heart. Providing a haunting experience like no other in the Alamo City, 13th Floor will transport you to all new levels of horror. Featuring two Haunted Houses, visitors will descend into the basement of a building that is over 100 years old and venture through before entering the graveyard which leads you to the holding area to board the elevator to the 13th Floor!

Screams Halloween Park - Waxahachie, TX
Presented by MetroPCS, Screams Halloween Park celebrated its 20th year of terror in 2016 and features an array of seasonal entertainment through the Halloween Season. From three Haunted Houses, the Ghoulish Graveyard and CarnEvil Clown Maze to live entertainment and tasty food at the Full Moon Cafe, Screams knows how to satisfy the appetite for fright so many are hungry for as the season arrives!

Dark Hour Haunted House - Plano, TX
A Top 10 Rated Attraction Nominee on TexasHauntedHouses.com in 2015, Dark Hour Haunted House provides Plano locals with over 30,000 square feet of scares. The crew at Dark Hour opened its doors in the Fall of 2013 and has ever since been producing a genuine theatrical experience for thrill seekers to take on.