Foundation for a Drug-Free World Florida: Drugs are as Scary as Monsters at Halloween 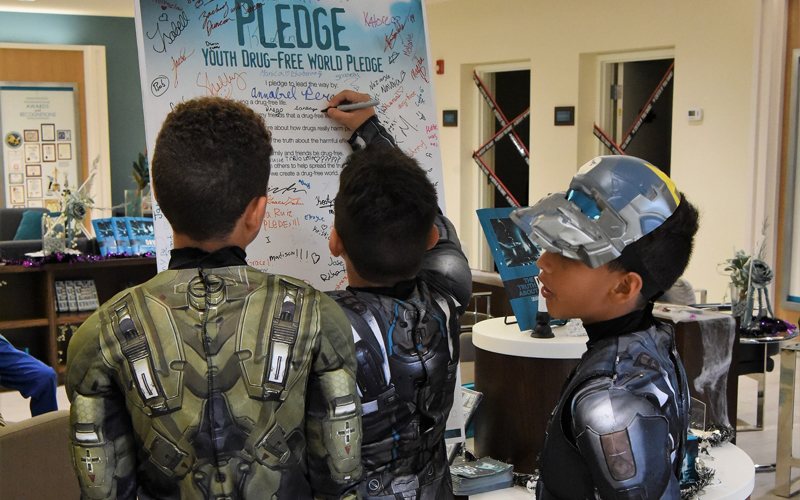 With THC being put in edible candy and snacks that kids recognize, such as gummy bears, Pop-Tarts, etc., it is even more important to educate kids about drugs.
Photo by: Foundation for a Drug-Free World/einpresswire

With little witches, zombies, ghosts and other scary creatures walking the streets on Halloween the Foundation for a Drug-Free World (FDFW) Florida Chapter opened its doors and distributed candy and information pamphlets on the dangers of drugs to 350 trick or treaters. Children also signed the drug-free pledge with their proud parents looking on at the FDFW’s center in downtown Clearwater.

“Drugs are scary. They are not a light matter,” said Julieta Santagostino the President of the FDFW Florida Chapter. “It is so important to educate parents and youth on the dangers of drugs. Some children have been introduced to drugs as young as 8 or 9 years old, so it is never too early to educate elementary school children on this subject.”

With the marijuana industry now putting THC in edibles that look like regular candy and snacks that kids recognize, such as gummy bears and Pop Tarts, it is even more important to educate children about drugs.

“The most common overdose incidents in children occur when the drug has been combined with food in an ‘edible’ form of marijuana. This is because marijuana ingested in this manner can have a stronger and prolonged effect, especially in children under the age of 12 years old.

“In these instances, kids mistake ‘edible’ marijuana (like gummy bears, brownies, lollipops, etc.) for regular food and eat it unknowingly. Small children are at higher risk based on their size and weight. Because edible products have very high amounts of marijuana, the symptoms are more severe on a small child. Many young children who consume marijuana edibles require hospital admission due to the severity of their symptoms.”

FDFW provides free drug education materials, including The Truth About Drugs documentary DVD and 14 different informational booklets on the most commonly abused drugs - such as marijuana, alcohol, painkillers and heroin. Anyone can get copies to share with their families and friends.

To get more information or a copy of the information booklets or documentary DVD on the dangers of drugs you can visit the Foundation for a Drug-Free World information center at 41 N. Fort Harrison Ave, Clearwater, FL 33755 which is open every day or contact the FDFW at 727-467-6962.

Weekly seminars are also held every Wednesday at 7:00PM at the FDFW information center. The events are always free, and refreshments are served.

Foundation for a Drug-Free World
The Foundation for a Drug-Free World is a non-profit organization that educates youth and the community on the truth about illicit drugs so they can make the right decision to live drug-free. The Church of Scientology is a sponsor of the program making it possible for the Foundation to provide educational materials at no cost to educators, law enforcement and the community. L. Ron Hubbard, the founder of Scientology said, “Drugs rob life of the sensations and joys which are the only reasons for living anyhow.”