Hauntings of Connecticut: Ten of the State's Most Haunted Places 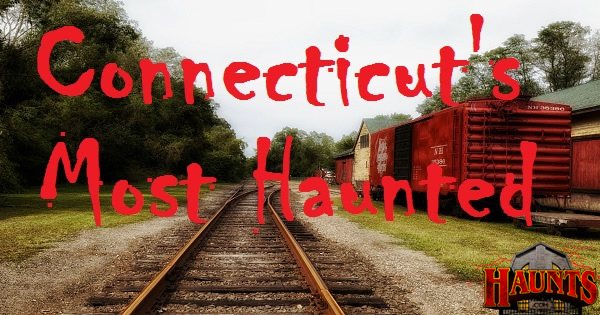 Who doesn't love a good ghost story? Well, in Connecticut, there's a whole lot of them! From hospitals and asylums, to cemeteries, schools, theaters, restaurants, parks, bridges, and even roads, there's an endless amount of places throughout the state that are said to have some ghostly spirits lingering.

Some of these creepy spots are located in the biggest of cities that everyone knows about, and others in small towns that only locals may know of. Take a peek below to check out our Top 10 Haunted Places in the state of Connecticut! 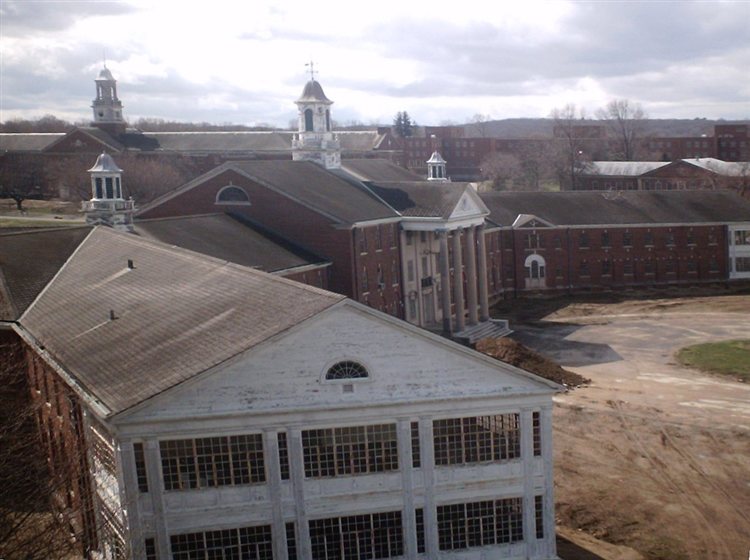 Located on Primrose Street in Newtown, Fairfield Hills was a psychiatric hospital that operated from 1931 to 1995. During its peak, the hospital housed over 4,000 patients and the facility was owned and operated by the State of Connecticut Department of Mental Health. The establishment was created due to overcrowding at the other state hospitals and was designed by Walter P. Crabtree. The building stands abandoned today and was used as the setting for the film "Sleepers" and MTV's "Fear." Although there is no trespassing on the property, some that have explored the place have witnessed paranormal activity, most likely coming from the tragic history of patient abuse that took place there. 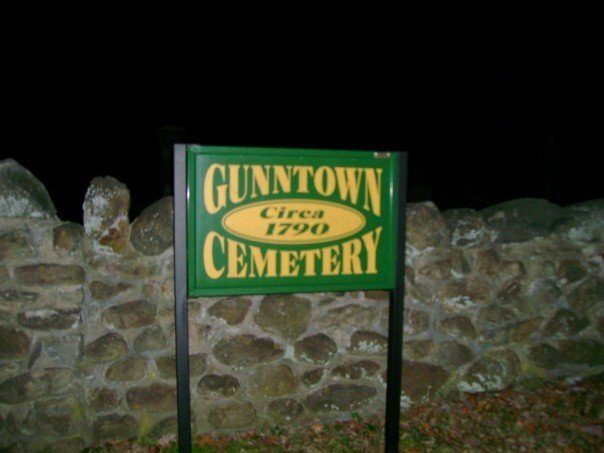 Photo by 2112guy, via WikiCommons

This old cemetery dates back to 1790 and many of Naugatuck's citizens who supported independence from British rule during the Revolutionary War are buried there. The cemetery was declared "officially haunted" by Connecticut paranormal investigators, Ed and Lorraine Warren. The haunting that is most reported here is the sound of children's laughter and music that starts in the surrounding woods, then closes in on the listener until it seems as though it is inside the cemetery.

Some witnesses have claimed to see a solid black dog near the cemetery, and some feel that this is a foreboding sign of death. Sometimes a person will see the dog, but their companions will not. Many photos have been taken at the cemetery, depicting spirit energy in the forms of orbs, ectoplasmic mist and globules. Orbs have also been seen floating around the grounds. According to Wikipedia, "Airing as a special for Halloween 2010, the paranormal investigation team CTPASTS (The Connecticut Paranormal And Supernatural Tracking Society) was featured in a segment regarding cemeteries on the television program "Crossroads Magazine", with Gunntown paranormal activity being the focus." 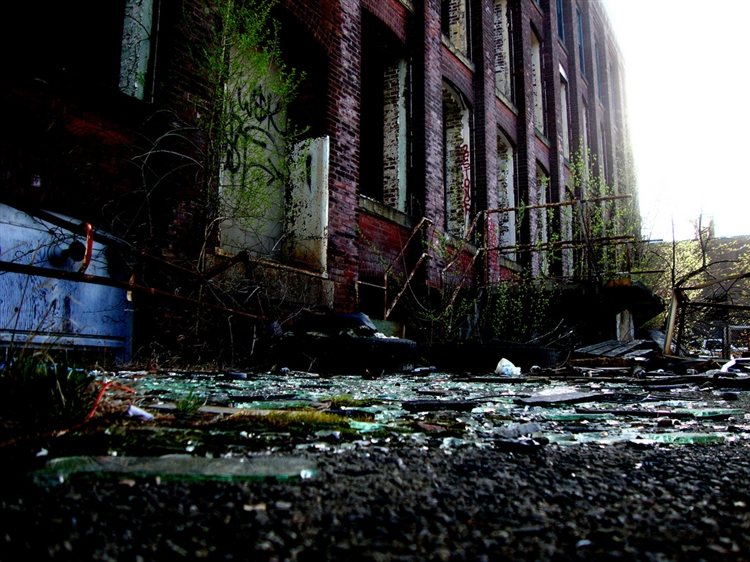 Bridgeport's Remington Arms Factory was an Army and Navy surplus shop and it stands abandoned today. The Travel Channel featured the location on an episode of "Ghost Adventures," and the place is believed to be haunted due to its dark past that included deaths by strange explosions, electrocutions and even melted bodies. The factory closed down in the 1980s because of all the accidents that took place there and some say the ones who died still linger the building to this day. Haunting reports include shadow figures, yelling, voices talking and the sounds of weapon-factory work. 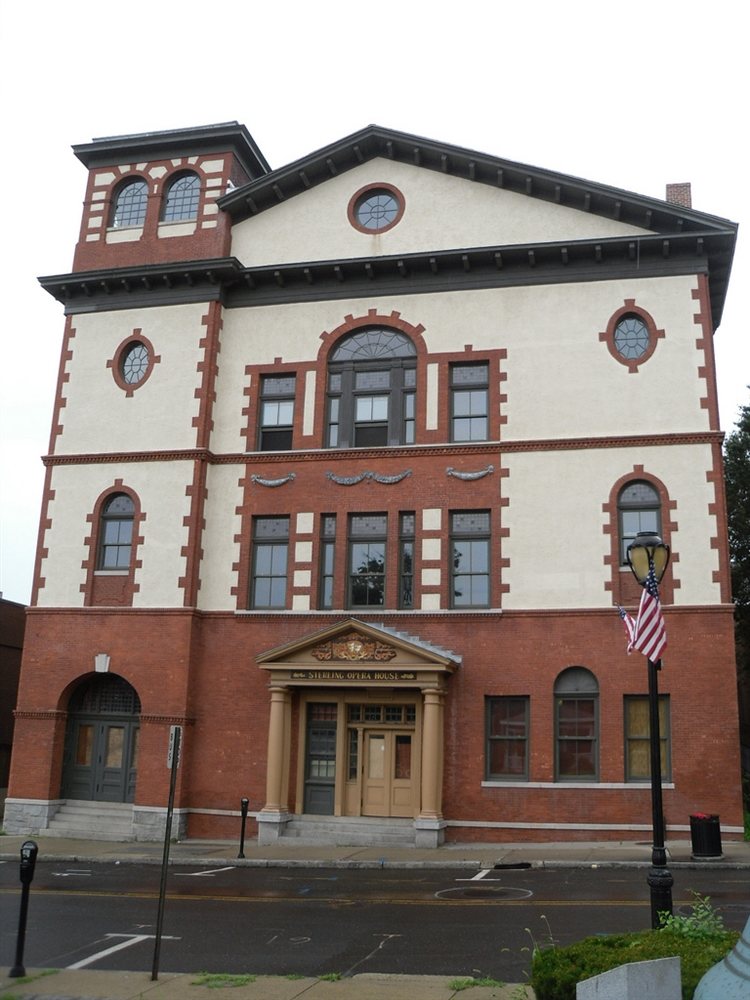 Located on Elizabeth Street in Derby, The Sterling Opera House dates back to 1889 and was added to the National Register of Historic Places in November of 1968. When it was first constructed, it was intended to be a city hall building but then ended up being a hot spot for performances and musical history. It was designed by Italianate Victorian style artist H. Edwards Ficken, who was also the co-designer of the famous Carnegie Hall in Manhattan. The building's two lower level and its basement operated as the town's City Hall and police station when it first opened until 1965.

In 2011, TV's "Ghost Hunters" explored the opera house after many haunting claims. Witnesses have reported seeing shadow figures, orbs of light and objects move on their own. No tragic stories or deaths surround the building, and it is believed that the ghost of Charles Sterling, the namesake of the place, lingers here. 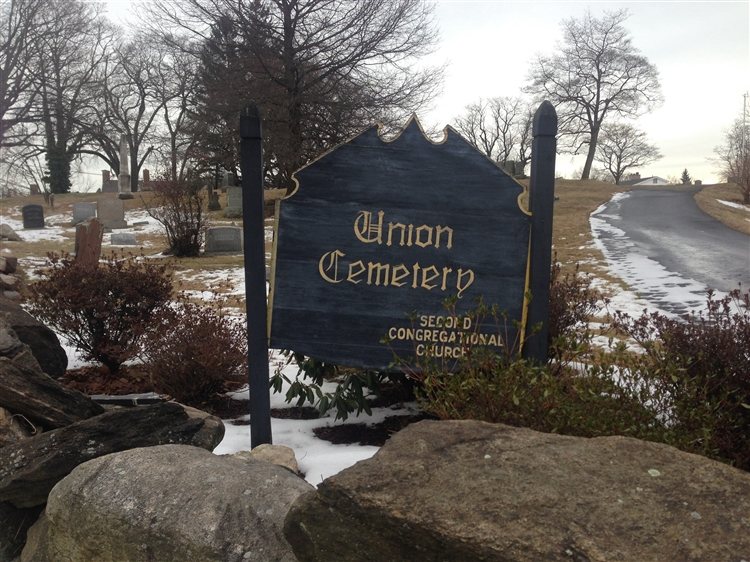 Union Cemetery dates all the way back to the 1700s and according to paranormal investigators, it is one of the "most haunted" cemeteries in the country. There's a legend surrounding the cemetery that tells the tale of the White Lady, and is one of the most popular ghost stories. The White Lady has been spotted by a number of witnesses, and has been ever since her death in the 40s. Ed and Lorraine Warren explored the grounds and the cemetery was even the subject of the book "Graveyard: True Hauntings from an Old New England Cemetery." Another entity that lingers at Union Cemetery is known as Red Eyes, the glowing, crimson eyes that many see peering out from the nearby underbrush. 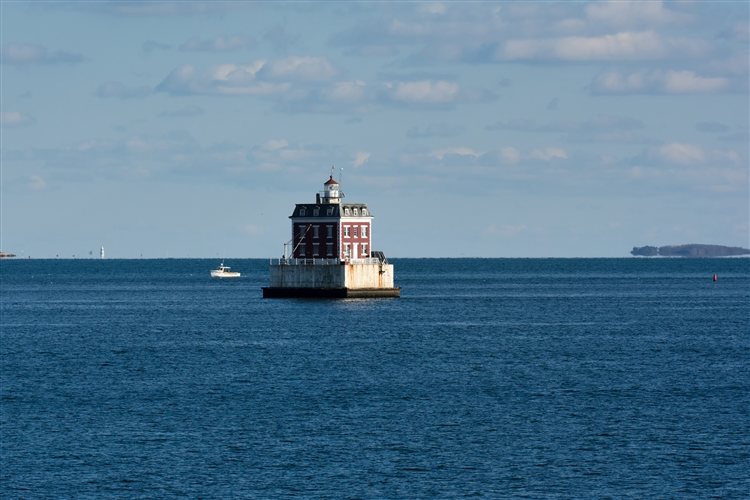 This lighthouse is on the Thames River, at the mouth of New London Harbor and stands at 58 feet high. The New London Maritime Society currently owns the lighthouse as part of the National Historic Lighthouse Preservation Act program and the non-profit, all volunteer Ledge Light Foundation (LLF) maintains, preserves, restores and provides public access to the lighthouse. It dates back to 1909 and was built on the Southwest Ledge, and was originally called the Southwest Ledge Light. But because the name would get confused with another lighthouse in New Haven, it was renamed the New London Ledge Light in 1910.

The famous ghost that haunts this lighthouse is known as "Ernie," an early keeper of the place. The Coast Guard crew at the lighthouse reported unexplained knocking that would take place at night, along with doors that opened and closed on their own, televisions that turned on and off by themselves and sheets being removed from beds without explanation. The lighthouse has been featured on TV's "Ghost Hunters" and "Scariest Places on Earth." 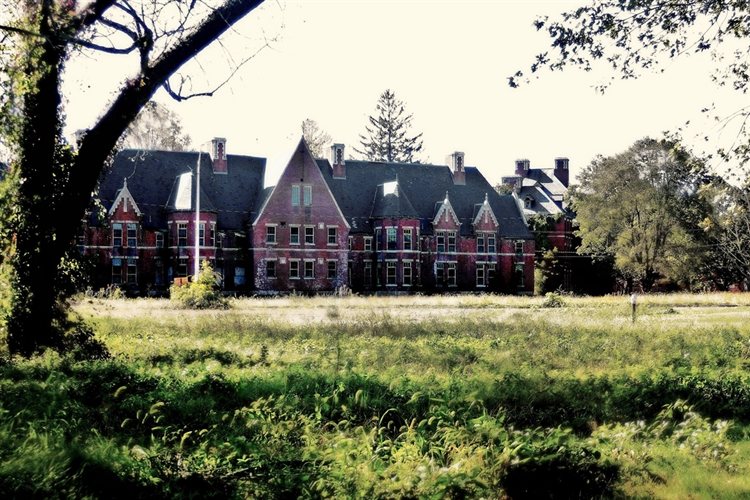 Originally known as the Norwich State Hospital for the Insane, and later Norwich Hospital, the establishment first opened its doors in 1904. 70 acres of the land was added to the National Register of Historic Places in 1988 and was also listed as an Historic District. Located on the banks of the Thames River, the hospital started out as a single building and at its peak, featured over 30 buildings and 900 acres.

Demolition of the hospital has been ongoing for years now, and the location was featured on VH1's "Celebrity Paranormal Project" and on Syfy's "Ghost Hunters." Haunting reports here include strange mists, orbs, uneasy feelings and EVPs, most likely stemming from the hospital's past that lead to many patient deaths. 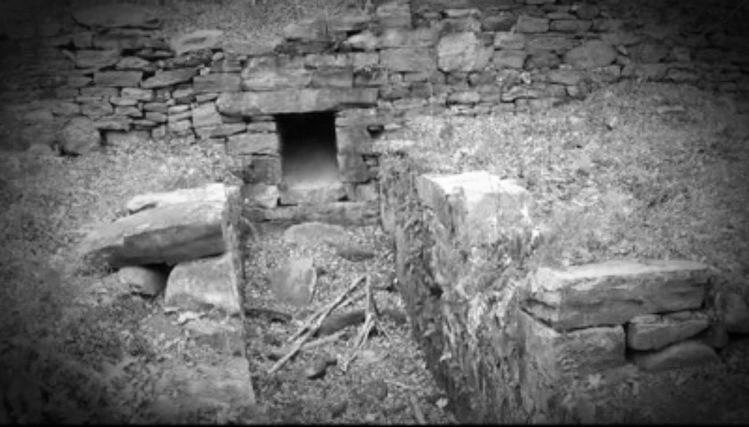 Founded as a small settlement in Cornwall in the mid-1740s, Dudleytown was abandoned in the 1800s. The land occupied by the village has been maintained since the mid-1920s by philanthropists as a private land trust. There are few traces that remain of the original village, and ever since its haunting stories surfaced in the 1980s, the area has been vandalized frequently and the owners closed the land to the public.

On Wikipedia, it states that a local rumor was started, saying that "the founders of Dudleytown were descended from Edmund Dudley, an English nobleman who was beheaded for treason during the reign of Henry VII. From that moment on, the Dudley family was placed under a curse, which followed them across the Atlantic to America." 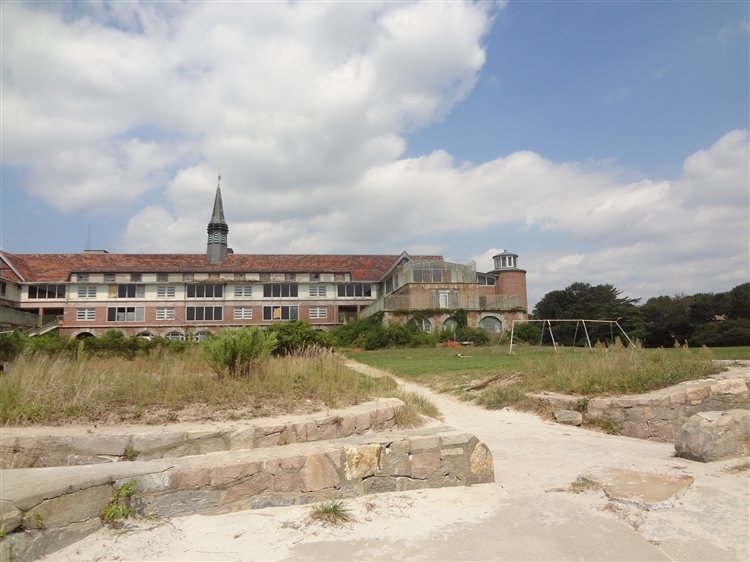 This historic medical facility is located in Waterford and dates back to 1934. The establishment was added to the National Register of Historic Places in August of 1995 and was once a children's hospital before becoming a facility for the mentally challenged. The massive facility overlooks the Long Island Sound and after standing abandoned for quite some time, there were rumors of the property becoming a state park. According to Damned Connecticut, the place was investigated by The New England Paranormal Video Research Group, and along with the spooky vibes, they captured some electronic voice phenomena and some spirit orbs in photos. Some strong sensations were also experienced. 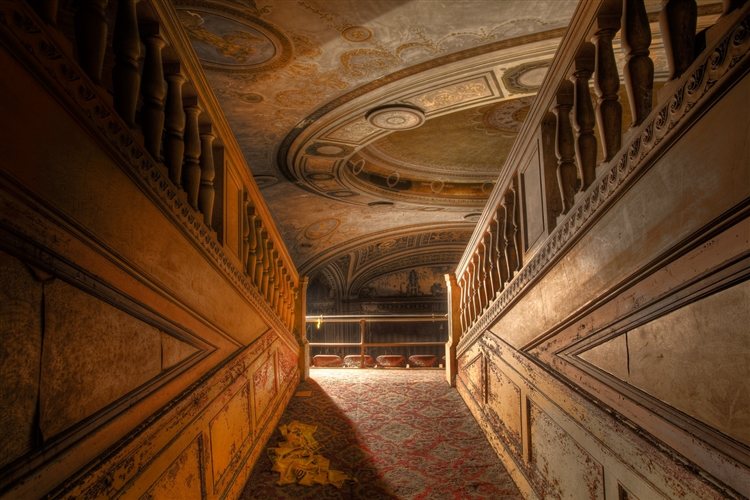 The Majestic Theater of Bridgeport was once a 13-acre complex where the Poli Palace and Savoy Hotel were located. When it was built, it was the largest theater in Connecticut and was listed on the National Register of Historic Places in 1979. It closed its doors in 1971 and has been considered a paranormal hot spot. Haunting reports here include shadow figures, electronic voice phenomena and orbs that appear in photos. Some say the complex was built on an ancient Native American Burial Ground, which may be the cause of the alleged hauntings.

Click here to read about more Haunted Places in Connecticut!