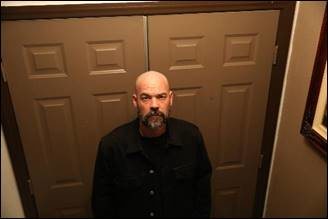 The “Ghost Adventures” team investigates the former home of Aaron Goodwin, where his father now resides and is experiencing terrifying paranormal activity. Aaron Goodwin inside his father’s house.
Photo by: Travel Channel

In a highly personal “Ghost Adventures” episode, Zak Bagans, Aaron Goodwin, Billy Tolley and Jay Wasley are called in to help Aaron’s father, Don Goodwin, who is experiencing terrifying and threatening paranormal activity inside his house. For Aaron, who previously owned the Las Vegas home and also experienced frightening phenomena while living there, it’s an especially alarming case. The special episode will premiere on Thursday, March 26 at 9 p.m. ET/PT.

When the crew arrives at the house, they find a distraught Don, terrified by an apparition of a little girl with no eyes and no mouth, and a dark, powerful presence a neighbor believes is a witch. As the team interviews Don and other witnesses, feelings of nausea and dizziness overwhelm them all. During their lockdown – ridden with unexplained activity including shadow figures, voices and EVPs – uneasy feelings continue to overpower the team, particularly inside a room that once terrorized Aaron. As they dive deeper into their investigation, they feel the entity progressively feeding off their energy, to the point where Bagans is unable to move. When Don has an unexpected emotional reaction after leaving the house, the crew becomes increasingly concerned about the power of this entity.

About “Ghost Adventures”
In each episode of “Ghost Adventures,” Zak Bagans and Aaron Goodwin, along with A/V techs Billy Tolley and Jay Wasley, travel to a different haunted destination where they meet with locals, eyewitnesses and experts in an attempt to piece together the haunted history of each site. They then begin their “lockdown” investigation, using the latest scientific gadgets and technology in an effort to obtain physical evidence of the paranormal and uncover the truth behind each haunted mystery.