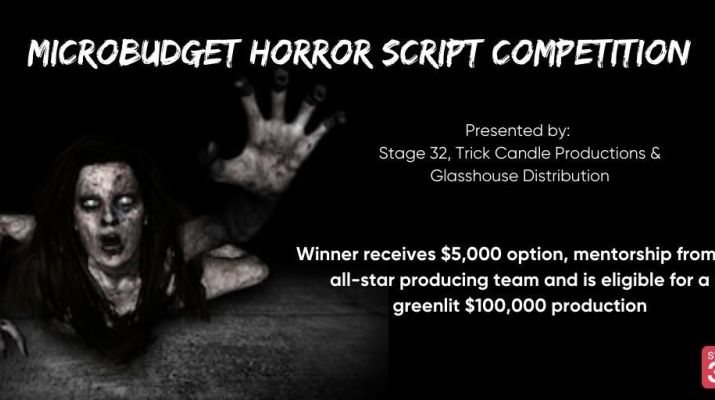 Winner receives $5,000 option, mentorship from an all-star producing team and is eligible for a greenlit $100,000 production.
Photo by: Glass House Distribution

The world’s largest online film networking and education platform, Stage 32, has partnered with Trick Candle Productions and Glass House Distribution to launch a brand-new Microbudget Horror Script Competition for 2020, it was announced today. The winning script will receive a $5,000 option and be entered into a mentorship program with the film’s producers and be eligible for a production greenlit for up to $100,000 by Trick Candle and Glass House.

Over the last 8 years, Stage 32 has become an incubator for finding talent and material across the globe. Recent projects to come out of Stage 32 include the upcoming Chick Fight starring Malin Ackerman, Alec Baldwin and Bella Thorne and 10-31, a horror film which will be produced by renowned director Eli Roth, Roger Birnbaum and Orion Pictures.

Glass House Distribution is an international distribution company specializing in feature films and television. Founded by Malloy and Bryan Glass in September of 2015, Glass House has grown to a major player in the world of film and TV sales,
Glass House’s original series Dropping the Soap won an Emmy for Star Jane Lynch, for Best Actress in a web series or comedy.

“We love associating the Stage 32 brand with those at the forefront of the independent film revolution. Trick House Productions and Glass House Distribution have paved the way for the way independent productions are made and distributed. We look forward to collaborating with them and finding yet another undiscovered writer to help bring their project to market,” said Stage 32 CEO Richard Botto.

This contest is open to all horror/thriller writers and writing teams around the world with microbudget screenplays that can be filmed for up to $100,000. Stage 32, Trick Candle, and Glass House are looking for unique ideas and original voices. Whether darkly comical, grindhouse gory, or classically conceived, all concepts are welcome.

“Stage 32 is the premiere online portal for connecting film, television and digital creatives worldwide and creating an environment for projects to come to fruition. They’re success is unparalleled. We’re excited to partner with them and pull in writers of the high caliber who reside on the platform,” says Malloy.

With over 500,000 members, Stage 32 is the world’s largest online platform connecting and educating film and television creatives. Established in 2011, Stage 32 has members from every country ranging from film students to Academy, Emmy, and BAFTA Award winners. Stage 32 has been recognized as the online leader in collaboration, education, and employment opportunities and has been described as “LinkedIn meets Lynda for film and television creatives” by Forbes Magazine.

Glass House Distribution’s guiding motto of “Full Transparency,” (hence the Glass House), as well as a high bar for quality movies has set Glass House on a course to be one of the future leading sales companies.