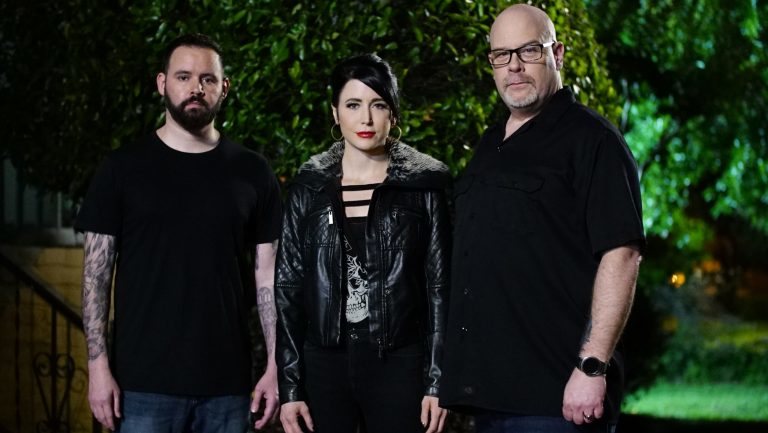 Shane Pittman, Cindy Kaza, and Dave Schrader go over their gameplan one more time before entering the Howard Dickinson House in Henderson, TX, as seen on Travel Channel’s The Holzer Files.
Photo by: Travel Channel

Last year, exclusively and for the first-time ever, Travel Channel reopened the case files of America’s first ghost hunter, Hans Holzer, revealing the original recordings and documents from the paranormal pioneer’s renowned studies. Following a very successful first season of “The Holzer Files” – which pulled in more than 5.8 million viewers – Travel Channel has announced a second season pickup. The series will return in late 2020 with 13 brand new episodes.

“Viewers were fascinated to reopen these mysterious and harrowing cases through ‘The Holzer Files,’” said Travel Channel general manager Matthew Butler. “It really is a striking tribute to Hans Holzer himself – who would have turned 100 this week – to revisit more of his investigations and to honor his lifelong work and pioneering journey into the unknown.”

In “The Holzer Files,” a dedicated paranormal team – led by paranormal investigator Dave Schrader, psychic medium Cindy Kaza and equipment technician Shane Pittman – revisits Holzer’s most captivating cases. With the help of Holzer’s daughter, Alexandra Holzer, and researcher Gabe Roth, the team picks up where Holzer left off to re-examine the terrifying hauntings that he dedicated his life to researching.

Recognized as the “father of the paranormal,” Hans Holzer’s legendary four-decade exploration into disturbing hauntings like the Amityville Horror house, helped spawn legions of supernatural enthusiasts, more than 120 books and even inspired Dan Aykroyd and Harold Ramis to write “Ghostbusters.” In each hour-long episode, the team will cull through thousands of Holzer’s recently discovered documents, letters, photographs and chilling audio and visual recordings dating back to the 1950s. Using his findings, team members track down recent developments from each haunting and head back to the location to reinvestigate with a fresh perspective, harnessing their own research, skills and expertise.

ABOUT THE TEAM
Dave Schrader is an experienced paranormal investigator and radio host. He became fascinated with the unexplained at an early age, reading books by parapsychology pioneers like Hans Holzer. He has traveled the world in search of the truth behind some of the most terrifying claims of the supernatural. Dedicated listeners from across the globe have been tuning into Schrader nightly via his popular radio programs like “Darkness Radio” and “Midnight in the Desert,” where he deep dives into the strange, fringe and bizarre realms of the paranormal. He is also the co-author of the book “The Other Side” and has been featured on several hit paranormal television series including “Ghost Adventures,” “Paranormal Challenge” and “Paranormal State.” Schrader prides himself on being one of the last people to interview Hans Holzer before his death and is determined to honor Holzer’s legendary legacy.

Cindy Kaza is a psychic medium who had her first memorable encounter with a spirit when she was just 10 years old. She dismissed this chilling experience as just a dream until her early 20s, when she realized she was continually having psychically spiritual experiences. Since this “awakening,” Kaza has been searching for the truth about her gifts and testing the limits of her multi-faceted abilities, including “automatic writing,” in which she allows the dead to communicate directly through her via free-form writing. Kaza has trained at England’s renowned Arthur Findlay School of Intuitive Sciences and now travels across America providing people startling evidence and messages from the dead.

Shane Pittman is an equipment technician who has had profound unexplained paranormal experiences since childhood. Pittman became determined to learn as much as he could by researching every possible technological method, in the hopes of finding the truth about his otherworldly encounters. Pittman strives to use his passion for modern technology to advance the field of paranormal study, attempting to scientifically validate paranormal experiences using the latest techniques available. Pittman is also the lead investigator for the Fusion Paranormal team and was host of “The Fusion Project” podcast.

Alexandra Holzer is the daughter of legendary parapsychologist Dr. Hans Holzer and has continued his research into the unknown. She is a published author and paranormal investigator and, along with her husband, founded the New York-based global investigation organization, Hunt with Holzer.

Gabe Roth is an experienced researcher, storyteller and producer with a background in journalism, captivated by the freaky facts and fascinating fictions associated with the paranormal. He has produced several paranormal television series, including “My Haunted House” and “Evil Things.”