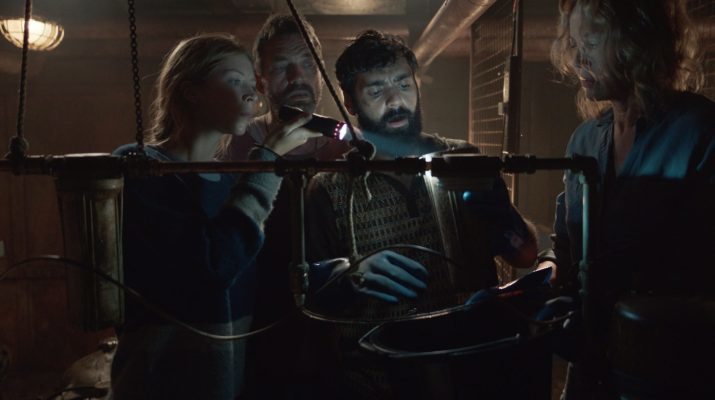 DUST to host a live screening, with a fully interactive Q&A with director Neasa Hardiman and the cast led by Connie Nielsen, of the critically acclaimed sci-fi, horror film “Sea Fever.”
Photo by: DUST

The live stream event will take place on https://seafever.watchdust.com on Thursday, April 9 at 6:00pm PT. For a small pay-per-view fee, fans can tune in to watch the official film premiere together, post their comments in a chatroom, and have their questions answered by the cast and crew via a moderated Q&A following the credits. The event will kick-off SEA FEVER’s On Demand and Digital release on April 10th.

This virtual communal experience is the first-of-its-kind – giving audiences the chance to interact with each other and the film’s stars in the comfort of their own homes. SEA FEVER initially had a nationwide theatrical plan in partnership with Alamo Drafthouse and Fantastic Fest. However, with the recent closure of theaters throughout the country due to the growing Coronavirus pandemic, Gunpowder & Sky pivoted from its original theatrical plans, and is bringing the communal theatrical viewing experience to audiences at home.

“Like everyone else, we are adjusting to life’s new challenges on a daily basis and feel Sea Fever is more relevant than ever,” said Janet Brown, EVP of Acquisitions and Global Distribution for Gunpowder & Sky. “We are psyched to host the first-ever live experience of a film screening, and can’t wait to share it with audiences!”

SEA FEVER made its world premiere at the Toronto International Film Festival with critical acclaim.

In SEA FEVER, Siobhán’s a marine biology student (Hermione Corfield) who prefers spending her days alone in a lab. She has to endure a week on a ragged fishing trawler, where she’s miserably at odds with the close-knit crew. But out in the deep Atlantic, an unfathomable life form ensnares the boat. When members of the crew succumb to a strange infection, Siobhán must overcome her alienation and anxiety to win the crew’s trust, before everyone is lost.

SEA FEVER has drawn comparisons to claustrophobic classics such as Alien and The Thing with RogerEbert.com declaring it, “One of those out-of-nowhere stunners” and “a masterful genre film.” Collider hails the films as, “A nightmare you can’t take your eyes off of, and can’t stop thinking about after it wraps up.”

DUST is the first premium sci-fi entertainment brand and channel that reaches fans across all platforms. Giving voice to both emerging and established filmmakers, DUST acquires, produces and distributes all content types, from timeless classics to cutting-edge movies, series, short films, and podcasts.

Most recently, DUST released season two of its sci-fi podcast with the launch of “Flight 008” on Apple and all major podcast platforms. “Flight 008” was created by 11 of the biggest writers in science fiction, through 11 unique stories, following one single thread: a non-stop flight from Tokyo to San Francisco that passes through a wrinkle in spacetime and lands in the year 2040. Season one of science fiction audio stories, “Horizons” which, in less than 30 days, hit #1 in Apple’s ‘New & Noteworthy’ section, breaking into the Top 100 Podcasts in the U.S. and was selected for Stitcher’s Best Fiction of 2019 list.

Since its inception in 2016, Gunpowder & Sky has released more than 30 feature films and series, as well as hundreds of short films theatrically, on TVOD as well as in partnership with leading platforms such as HBO, Netflix, MTV, Hulu, Sky, Showtime, DirecTV, Amazon, Facebook, YouTube, and soon Quibi and HBO Max.

With in-house development, production, marketing and distribution capabilities, the company operates as a full 360-studio and oversees a library of more than 1500 titles. Notable films and series include The Little Hours, Cam, Hearts Beat Loud, Lords of Chaos, Her Smell, Tragedy Girls, Summer of 84, Villains, Hounds of Love, “50 States of Fright” and “Drawn and Recorded”.

With an audience of more than 50M monthly unique visitors, Gunpowder & Sky’s current streaming networks include DUST, a sci-fi brand that presents thought-provoking visions of the future; ALTER, a new horror brand that explores the human condition through warped perspectives; and CUT, an unscripted comedy brand that is home to “Truth or Drink” and “Grandmas Smoking Weed”. DUST, ALTER and CUT are presently distributed on HBO, Vizio TV, Comcast FLEX, Roku, YouTube, Facebook, AT&T, DirecTV, Sinclair, Samsung TV Plus and Instagram.

Headquartered in Los Angeles with offices in New York and London, Gunpowder & Sky was founded by Van Toffler and Floris Bauer, in partnership with The Chernin Group and AT&T.