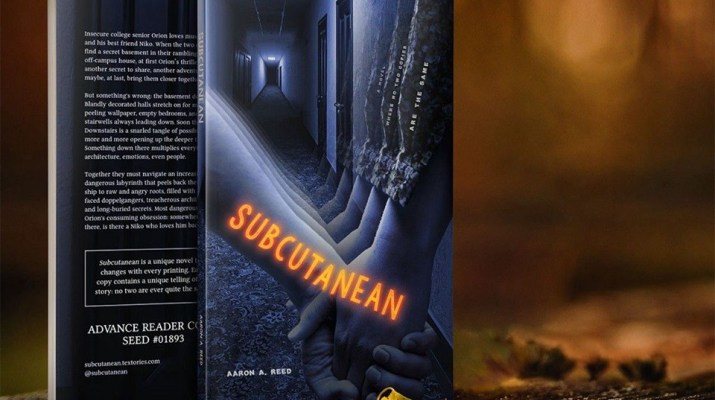 Subcutanean in all its versions tells the story of two college friends with a complex relationship, Orion and Niko, who discover a secret basement underneath their house.
Photo by: Aaron A. Reed

Interactive fiction veteran Aaron A. Reed has opened pre-orders for a one-of-a-kind book project: a full length horror novel, Subcutanean, whose text changes with each new copy. No two books are ever quite the same.

Reed is a winner of IndieCade’s “Best Story” award for game/book hybrid “The Ice-Bound Concordance,” and has also received laurels from tabletop roleplaying (2019 ENnie Award) and traditional publishing (Kirkus Reviews) communities. Reed has been writing interactive text for fifteen years. When he started work on a traditional novel, it was perhaps no surprise that it didn’t stay traditional for long.

“Gamers are used to the notion of stories that can change, and wondering what might have happened if you’d made different choices or gone down other branches,” Reed says. “I was working on an unsettling psychological horror story about two friends trapped in an underground labyrinth filled with multiple realities and overlapping possibilities, and started wondering what it would be like to transpose that kind of quantum storytelling to a printed book without choices, leaving the reader constantly uneasy about what other versions of the story might be out there– just like the book’s main characters.”

To create Subcutanean, Reed created a custom syntax for authoring multiple versions of words, sentences, or even entire scenes that differ from one version to the next. While the book’s plot doesn’t branch– each version has the same core outline– the different versions can reveal different details, unfold in different locations, introduce alternate plot threads or characters, trigger setup or pay-offs in other chapters, and resolve the characters’ stories in different ways. In combination, this library of alternatives means there are countless possible ways the story can be told.

Each time a copy is ordered, Reed’s custom software creates a new “rendering” of the text from the master source material, typesets it for print as a paperback book, updates the text on a print-on-demand service and orders a new copy. The rendering code has to deal with a number of unique challenges, like how to handle “widows” and “orphans”– single lines appearing at the top or bottom of a page, considered ugly by layout pros– when there’s no way to predict in advance how long any sentence, paragraph, or chapter will end up being, and where any piece of text will fall on the printed page.

Subcutanean in all its versions tells the story of two college friends with a complex relationship, Orion and Niko, who discover a secret basement underneath their house. But the basement turns out to be an endless labyrinth of peeling wallpaper, empty bedrooms, and stairwells always leading down. When the two become trapped in a subtly different mirror-world, they realize Downstairs is a snarled tangle of overlapping possibilities filled with two-faced doppelgangers, treacherous architecture, and long-buried secrets. Most dangerous of all is Orion’s consuming obsession: somewhere down there, is there a Niko who loves him back?

“The story of Subcutanean was inspired by my experiences as a young gay man starting college in a very red state,” Reed says. “My coming out process itself had been pretty painless, but I was cripplingly shy, and didn’t know how to meet people, navigate crushes, or find self-confidence. The book is set in the late 1990s, before marriage equality or same-sex stories being widely represented in popular culture, and that was a difficult time and place to find yourself. But I think anyone, gay or straight, can relate to that anxious feeling as you enter your 20s that you never got a tidy coming-of-age story, that maybe a different turn at the right moment might have set you on a different path, and that path might have been a better one.”

While there’s a tradition of one-of-a-kind children’s books (customized with a child’s name or favorite color, for instance), there have rarely been adult novels that change with every copy. Subcutanean’s uniqueness has already built it a following online, with over 800 Goodreads users marking it as “Want to Read”.

Subcutanean will go on sale to the general public on February 2– the palindromic date of 02/02/2020.

In addition to his award-winning game design work, for the past few years Reed has worked as an AI Specialist at Spirit AI, building technology for conversational characters for games. This November he will keynote the International Conference of Interactive Digital Storytelling in Snowbird, Utah, and he is the co-author of the upcoming non-fiction book “Adventure Games: Playing the Outsider” (with Anastasia Salter and John Murray) from Bloomsbury, also releasing in February 2020. Reed holds a PhD in Computer Science, an MFA in Digital Arts and New Media, and a BFA in Film Studies. He lives in Santa Cruz, California.