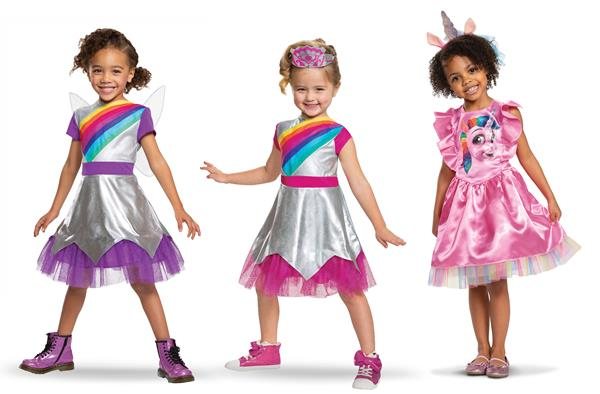 Genius Brands has initiated multiple retail launches for Rainbow Rangers for Halloween, highlighted by an in-store exclusive with Walmart, available in approximately 1,200 locations nationwide. Walmart will offer, exclusively, the Floof costume from Disguise based on the popular character in Rainbow Rangers. The Company has also unveiled an assortment of Rainbow Rangers Halloween costumes and accessories from Disguise at online retailers, including Walmart, Amazon, Party City, and halloweencostumes.com. Additionally, costumes are also available in approximately 1,200 Spirit Halloween stores through a direct-to-retail program.

“The launch of the Rainbow Rangers’ Halloween program at Walmart signifies our continued growth of the brand with merchandise distribution at mass retail,” said Andy Heyward, Chairman & CEO of Genius Brands. “This is just the beginning as we work with our top-tier manufacturing and retail partners to take this special brand to the next level with 375 SKUs across a broad range of merchandise categories planned in total for distribution at market over the next 12 months.”

“In the preschool merchandising market, Halloween is a significant holiday to create product that truly engages the audience with the brand, and we are thrilled to go to market this year with our first line of Halloween costumes for Rainbow Rangers with an amazing line-up of mass brick and mortar, specialty and online retail partners such as Walmart, Spirit Halloween, Amazon, Party City, and halloweencostumes.com,” commented Lloyd Mintz, SVP, Global Consumer Products, Genius Brands.

About Rainbow Rangers
Rainbow Rangers is a rescue-based series that follows the adventures of seven girls who are Earth’s first responders, protecting people, animals, resources, and the natural beauty of our world. The series airs Monday – Friday, 3x per day, and on the weekends with a new episode premiering each Sunday.